The Innovative Research Universities (IRU) group, which represents seven comprehensive universities across Australia, has called on the Government to give universities more flexibility about how they spend billions of dollars of research funding each year.

Of the $5.3 billion in funding awarded to Australian universities in 2016, only one dollar in five, or $1.05 billion, could be considered “open” funding that universities can choose to allocate as they want.

In contrast, $3.77 billion of research grants in 2016 were what the IRU refers to as “directed” funding, meaning the money has to be spent on a specific research stream. The remaining $454 million is a mix of directed and non-directed funding.

While Australia’s research funding has increased over the past decade, the proportion of “open” funds has fallen from 26 percent in 2006 to 20 percent in 2016 (latest figures available).

The IRU says the decline in open funding for universities constrains their ability to implement a coordinated research strategy as well as limiting experimentation and risk-taking in research projects – essential elements of creativity and innovation.

It wants the Government to increase the amount of block grants to ensure unis have more decision-making power over which research to undertake and better able to support Government and business investment in specific research projects.

The IRU says a greater commitment to funding universities would also create capacity in regional areas that are isolated from central infrastructure and resources.

IRU Executive Director Conor King raised the issue of open versus directed funding at an evidence session held today as part of the House of Representatives Inquiry into Funding Australia’s Research.

Mr King said the amount of money provided through block grant funding to universities needs to increase in order to support further diversity and relevance of high quality research in Australia.

“Funding for research has been increasing over time, but mostly in funding that is tied to specific projects.

“The IRU argues that block funding should be the next target for a real increase, to give universities a greater say over which research issues are supported and which are not.

“Universities are best-placed to know which research is most likely to have the biggest impact while delivering the best value for money.”

“Open” and “direct” are not official terms for research funding. The terms have been applied by the IRU to reflect the level of direction of the funding on the following basis:

Open source funding also increased from $859 million to $1.05 billion over this period (22%), mostly due to annual indexation to maintain value against inflation, and hence decreased as a share of total research funding from 26% to 20%.

Universities also draw on a portion of Commonwealth Grants Scheme (CGS) funding, student revenue and other “general university funds” to support research. These are the prime basis to support academic staff time for research. There is no Government funding scheme explicitly for this. 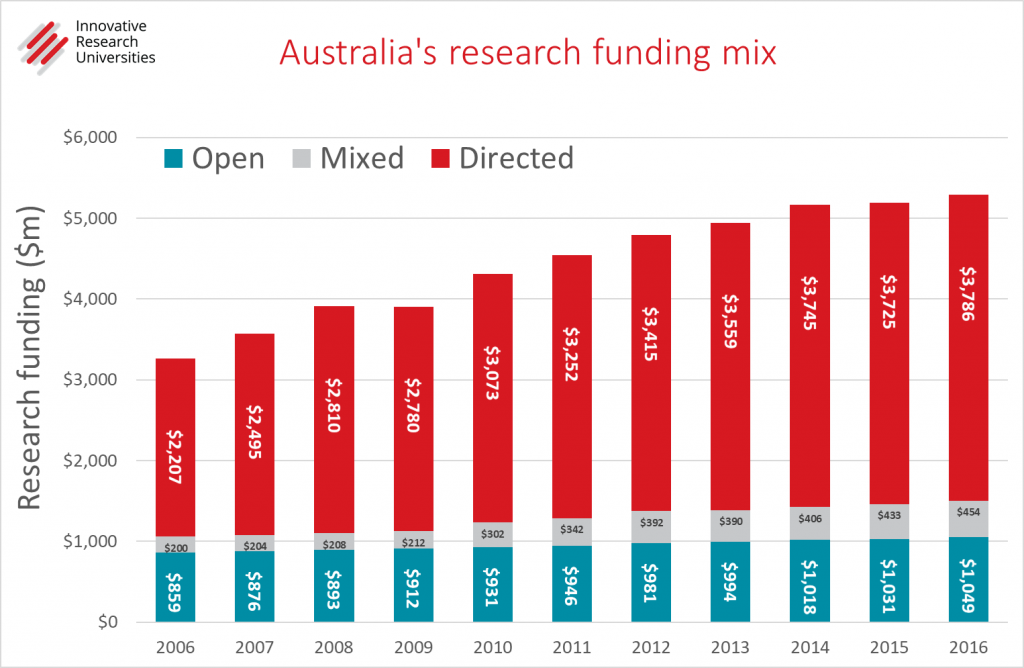