The Innovative Research Universities objects to the imposition of substantially higher costs through the proposed Skilling Australia Fund on the recruitment of staff with higher education qualifications who require visas to enter Australia.

Changing the charges for skilled visas: the Skilling Australia Fund

Under the legislation employers which nominate foreign workers under the new Temporary Skill Shortage visa and certain permanent visas will be required to pay a Skilling Australians Fund levy from March 2018.

The Skilling Australia levy would replace the current training benchmarks for employers sponsoring workers on Subclass 457 visas and permanent Employer Nomination Scheme (Subclass 186) visas and Regional Sponsored Migration Scheme (Subclass 187) visas. The levy requires businesses with an annual turnover of greater than $10 million to pay $1800 per visa at the time of nomination or $5000 per employee in a one off payment at the time of nomination.

IRU members estimate the difference in visa changes between 2017 and 2018 at $1.7 million across the seven universities.  Across all universities the additional charge would be around $15 million to $20 million.

At a time where the Government wishes to reduce substantially the public investment in universities that additional charge represents another further cost impost on universities, soaking up university revenue from Government, students and business to meet Government requirements.

The point of a Skilling Australia Fund

Universities as part of a global employment market

Universities are part of a global industry in which people move regularly across countries to new positions. This involves Australians working in many countries across the world, and people from many countries gaining academic and senior administrative roles in Australia.  The capacity of the Australian university system depends on its staff being part of this world wide movement.  The exploration and dissemination of knowledge is the basis of all university teaching and research. That knowledge has few restrictions driven by national borders.

Dramatically raising the cost of each international recruit will tend to reduce the number selected, which may appear to increase the opportunities for Australian residents. It would do so at the risk of reducing the strength of university education and research through fewer highly capable people from around the world being selected.

The extent of international staff is one of the factors that some world university rankings consider. This both supports the argument that having staff with international background is important and the pragmatic risk to Australian universities’ rankings which affects international student recruitment and access to research partnerships.

The response from other countries is hard to predict. Some may follow the Australian example to create barriers to international recruitment making it harder for capable Australians to develop the breadth of experience and capability that comes from working in university across the world.

The cost of the levy 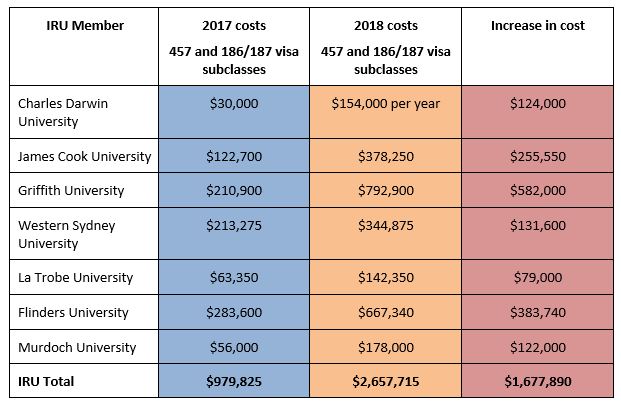 The Innovative Research Universities recommends that the Skilling Australia Fund not be resourced through a levy on employers which recruit staff selected for having high level higher education qualifications.